This is a book review for Genki Kawamura’s If Cats Disappeared from the World(世界から猫消えたなら).  I picked up this novel in a recent bulk order from Amazon JP for 654 yen. I have seen this novel mentioned by other language learners as being an easy read.  In my search to find novels that would be good first reads for other language learners, I decided to finally read it. The rumors were true!  This would be a great starting place for lower intermediate readers and above who want to start reading novels in Japanese.  Its an easy to follow, plot based story line that is written with simple grammar and vocabulary.

This is the tale of the last few days in a man’s life. The unnamed narrator is a young Japanese postman who has recently been given the unfortunate news that he has terminal brain caner. He has less then 6 months left and he is almost completely alone in the world. He has been estranged from his father since the death of his mother 4 years ago. He has a movie-nerd friend from high school that he visits occasionally at the video rental shop. He has an ex-girlfriend from college that he has grown away from. And that’s about it. The only one left for him is his cat, Cabbage, which he inherited after his mothers death.

The narrator doesn’t have much time to ponder this shocking news before a stranger appears in his life. A weird flashy guy in a Hawaiin shirt that turns out to be the devil(the one from Christianity). He has even more terrible news, the narrator life is even shorter then he thought! According to the devil, he will die tomorrow. BUT the devil as an offer. In exchange for erasing one thing from the world, the narrator can live another day. But for each day his life is extended, another item or idea of the devils choice is erased not just from the narrators world, but from everyone’s world. The Devil assures the narrator not to worry, as the devil isn’t new to this scheme. He’s done it 106 times before for other people.  Before each thing disappears, the narrator will have once last chance to enjoy it before its gone forever.

My experience reading this book:

This was a really easy book for me to read, I think I could have finished it in one day if I had the day off.  But I used it to read when I was on call for work.  I think there is just something about plot based books that make them faster reads.  With more slow stories, I like to take my time and really time about what it happening and how certain words feel in different contexts.  But this story only took place over a week and to be honest due to the dialog and occasional prose-like passage, the pages of this book very very little on words.

The book and movie are advertised as being a deep and moving experience.  Most of the trailers for the movie will open with scene after scene of Japanese women crying in movie theaters.  But it didn’t really feel deep to me. I find that I am even more emotional in Japanese then I am in my native language, so if I didn’t feel anything then I don’t think the average person will either? It just felt like average easy pop fiction which is exactly what I was looking for. I think the author purposefully kept the main characters personality vague to help readers step into his shoes and go along for the ride, but I found it distracting as I felt like there was less I could use to connect to the main character.

After reading the book I watched the movie just to double check and find out why all of those Japanese women were crying.  The movie was like… one of the most generic movies I have ever seen.  I liked that it seem to add some bits of personality to the main character.  But besides that, I liked how the novel handled the disappearances of stuff better.

About a week after I purchased this novel, I found out that my local library system had a copy of it!  I was disappointed in myself for not looking into what my local library had to offer sooner.  I looked into the local university library but just assumed that an area with barely any Japanese population wouldn’t have anything.  Out of the novels I have purchased the past few months, three of them are at the library.  I could have really saved myself some money!  But that’s okay, lesson learned.  I went thought the whole Japanese catalog online and found around 30 novels that I am interested in reading so I hope that I can make use of the library big time this year.

Just to give some background to my current level. I have been using Japanese for a long time now, but just decided somewhat recently to be more serious about gaining fluent literacy. In 2020 I finished reviewing over JLPT N2 materials and have started on N1. I am planning on taking N1 in 2021. I started reading novels in 2020 and have read over 40 to completion.

I think that this book would be a great choice for N3 level students.  The book seems to be written with the general population in mind uses mostly basic vocabulary.  All of the concepts are from ordinary daily life, just with a twist that they disappear.

I did not notice any specialized vocabulary groups in this book that stick out to me.  I think that the second that goes over the creation of the world from a Christian perspective can be difficult to those who are not familiar with the religion.

This book is written in an easy to understand way.  Its mostly basic sentence structures that most N3 students should be familiar with.

There are a lot of cultural references in this book.  Like a lot, I haven’t seen this many pop culture references in a novel before.   But most of them are are not from Japanese culture. I think that readers who have a western background will be at an advantage while reading this book. All of the music, movies, actors named in this book… all from western culture.  There are religious and situational references that kind of depend on having knowledge of western cultural as well.

Towards the beginning of the book on the first day of our nameless hero’s adventure, he meets a devil.  Based off of the description that the devil gives, this devil is THE devil from the creation story in the bible.  He takes the time to spell out what happened in the creation story during each of the 7 days and ending with her tricking Adam and Eve into eating the fruit of knowledge.  While the story is written out in an easy to understand way, I think that lower intermediate learners will find having a western or western religion back ground to be an advantage.  The day by day structure used in the creation story is followed through out the novel as something is changed and lost each day.  The book is split up into chapters based off of the day of the week that each part of the story is occurring on. 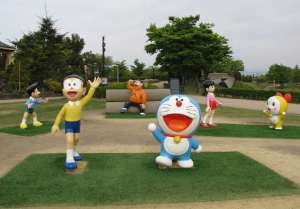 Doraemon and Nobitaro are classic popular Japanese cartoon characters that are used in a metaphor in the Tuesday chapter to explain what the main character feels about how the world must be experiencing the disappearances of important everyday items/concepts.  Everyone in Japanese knows who Doraemon is just to give a scale of popularity for those who might be unaware.

Doraemon and Nobitaro are both featured in towards the front of the picture above. Nobitaro is the boy in yellow and Doraemon is the blue robotic cat.

I think the animated movie Akira was mentioned once as well?  But overall one does not have to be very familiar with Japanese music, movies, or pop culture to read this book.  One does have to be familiar with a wide range of western/American media tho.  While not all of the references are American, as someone who grew up in America I knew every single reference mentioned in the book. Sometimes its not necessary to know the reference to understand what is going on, but the amount of times these references come up is kind of distracting.  I asked a Japanese native about some of the references and they seem to know all of them as well, so I guess these are the types of cultural knowledge that pretty much any Japanese person would have.

Who should read this book?

I think this would be a great first novel for lower intermediate level learners and above.  If you like popular fiction or are interested in reading a story that many Japanese people would be familiar with, then this would be a good pick. It was even nominated for the Booksellers Award in 2013.  This award has become my go to when looking for accessible popular novels to try out. Those who are familiar with western media.

Where can I read the first few pages of this book?

Using the following link, you can read the first few pages of this book on Bookwalker.com by clicking on the image of the book cover.

This book is extremely popular and you might be able to find it at your local library if they carry any Japanese novels.  I have also seen it at Chicago’s Kinokuniya book store and have picked it up before to look over some of the pages.

I love reading Japanese novels and have seen that many people want to read them but don't know where to start. I have decided to share my experiences to help people reach their literacy goals. View all posts by Kuri

One thought on “Japanese Novel Review: 世界から猫消えたなら If Cats Disappeared from the World by Genki Kawamura (川村元気)”